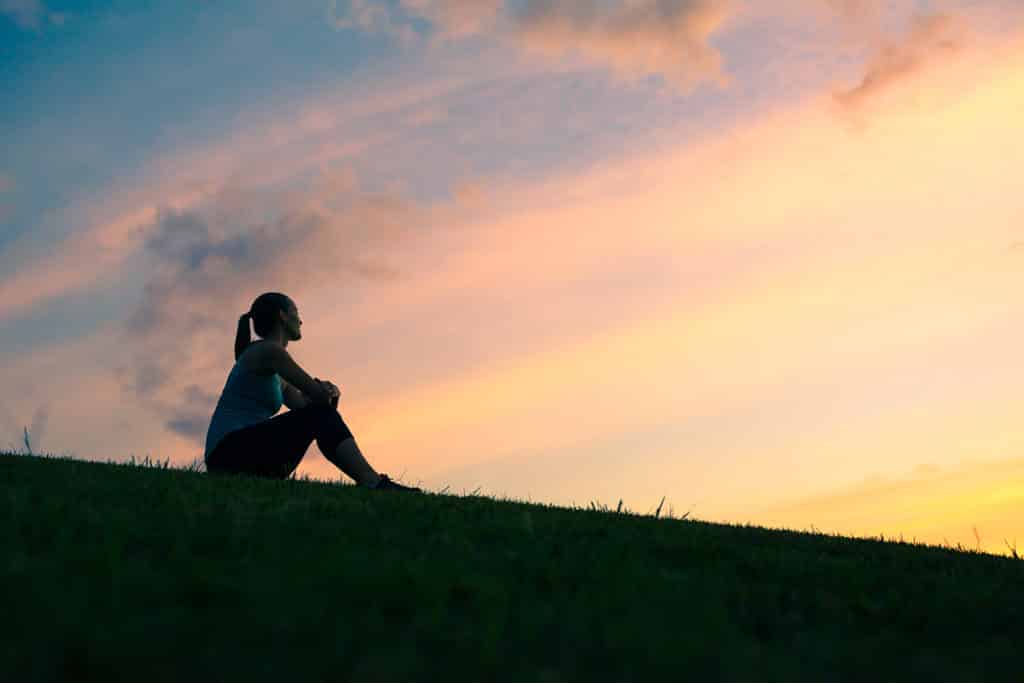 There’s a saying along the lines that there are only two things in life that are certain: death and taxes.

Sure, a lot of people manage to evade the latter, but the former is something that every living being has to face eventually.

Death is an inevitable part of life; part of the very cycle of life itself… and it’s a subject that absolutely terrifies a huge portion of the population.

Western culture in particular is very death denying, with its cult of youth and seeming hatred of anything old or sickly.

This is unfortunate, since people who are suddenly faced with life ending often go into a state of panic and shock, since they haven’t had gentle exposure to the process over the course of their lives.

So, how does one make peace with the reality of death, and eliminate the fear associated with it?

Caitlin Doughty, mortician and founder of the Order of the Good Death has amassed 7 reasons why people tend to be afraid of death:

If you pinpoint exactly what it is that scares you, you’re able to work through the fear and find a solution, right? So, let’s dive in and address them one by one.

1. Fear Of Death Causing Grief To Loved Ones

Grief is inevitable, as we have pretty much all experienced over the course of our lives. Anyone who feels love will eventually feel grief, but people are far more resilient than we tend to give them credit for.

Yes, losing you will cause pain, but eventually your friends and family members will be able to focus on all the wonderful experiences they had with you, and that sweetness will lessen the sorrow.

If you’re worried about things left unsaid, or feel that you want to reassure them about how much they’re loved, write them letters that they can open once you’re gone.

Say everything you need to say, and know that your words (preferably written in your own hand) will be treasured and read again and again to bring comfort.

2. Fear Of Important Projects Not Being Realized

In this case, having a really solid contingency plan and sorting out the necessary logistics can allay your fears.

For example, if you’ve been cultivating a gorgeous community garden, ensure that you have plans set out for how you want it to continue.

Give these plans to a custodian whom you know you can trust to make it happen, so you know everything will be in good hands once you’re gone.

Do you run a nonprofit organization? Assign someone to continue your work in the manner you have chosen.

Do you give to a particular charity? Make sure they’re one of the beneficiaries in your will.

Ultimately, it really comes down to organization, so when you have some free time, sit down and put some solid plans into action.

3. Fear That The Process Of Dying Will Be Painful

One topic that inevitably comes up when working with a fear of death is the worry that it will hurt.

It seems that the vast majority of people are less afraid of death than the manner in which they might die.

For a lot of people, the experiences they’ve had with death thus far revolve around relatives who have died in hospital, often of diseases such as cancer.

They rarely witness the death itself: that has lain in the hands of hospice workers and nurses, so the end process is imagined rather than real, with all kinds of terrifying images from film and TV thrown in for colorful measure to ramp imaginations into overdrive.

It is imperative to have a living will in which you stipulate advanced directives if you don’t want extreme medical intervention to save your life.

People who don’t have these directives in place are subject to the “keep them alive by any means necessary” clauses in most hospitals, so be sure to write out what is and is not acceptable to you.

When it comes to pain that may be experienced, there are excellent solutions for pain management available, including the option to be put into a palliative coma if the pain is unbearable.

Do Not Resuscitate orders can be put into place, and in areas where assisted death is an option, there is also the ability to end life on your own terms when you’re ready to do so.

4. Fear Of No Longer Being Able To Have Experiences

It may seem quite simple to say, but the solution to this one is to have those experiences NOW.

Have you ever read those top 5 (or 10) lists put together by hospice nurses, about things that people on their deathbeds regret most?

One of the most common regrets was not having lived a more authentic life: not living the life they truly wanted, doing the things they wanted to do.

Sort that out. Now.

You know the saying, “live each day as if it were your last”? It’s good advice, as it encourages us to revel in the beauty we have before us RIGHT NOW instead of putting off enjoyment until some far-off day when we feel we can or should do so.

If fear of not experiencing something important to you is what has been worrying you, really take some time to consider what it is you feel you still want to achieve, and why it’s so vital that you do so.

Make a list (the idea of a “bucket list” sounds cheesy, but seriously, write this down), and work out the following:

Rank these in order of most important to least important, and please, be really honest with yourself.

When you look at those at the top of the list – those you really want to experience or achieve – ask yourself what is preventing you from doing those things.

From there, you can determine a plan of action to help you make them a reality. That will go a long way toward lessening (or even eliminating) regret, and that’s absolutely huge when it comes to accepting that this life will come to an end eventually.

5. Fear Of No Longer Being Able To Care For Dependents

This is a big one, and it makes sense as to why people are worried about it, especially if young children or ill parents are involved.

If this is one of your major fears, sit down with a lawyer and discuss what your options are.

You can sort out guardianship situations, trust funds, and all manner of minutiae to make sure that those you care about will be in good hands if and when yours are no longer available to them.

6. Fear Of Life After Death (Or Lack Thereof)

When it comes to a fear of the afterlife – or the lack of one – it really comes down to what you truly believe, spiritually.

If this scares you, try to pinpoint exactly what it is you’re afraid of: are you afraid of some kind of “hell” awaiting you, because you think you deserve some kind of punishment for transgressions?

Or are you afraid that after death there will just be nothingness?

If you’re worried about an afterlife, seek out a spiritual leader from the religion or philosophy that resonates most strongly with you, and talk to them about your fears.

It’s almost guaranteed that whatever awful thing you might be imagining is tormenting you far more than your religion-specific afterlife ever would.

Every culture on the planet has some idea of an afterlife. For some, it’s a beautiful place like Heaven or the Summerlands, and for others, there’s reincarnation: that we slough off these temporary bodies like suits of clothing, and souls continue into either new bodies, or rise to higher planes of existence, like rejoining with the Source of all energy.

Even if you’re not particularly spiritual, but rather adhere to agnostic or even atheistic/scientific approaches, there’s comfort that can be taken in the fact that nothing truly ends. You can’t destroy energy: it just changes form.

Buddhist teacher and author Thich Nhat Hanh shares an analogy of death being much like the natural water cycle:

Imagine a white puffy cloud in the sky. Later on, when it starts to rain, you don’t necessarily see the same cloud. It’s not there. But the real truth is that the cloud is in the rain. It’s impossible for a cloud to die. It can become rain, snow, ice, or a multitude of forms… but a cloud cannot be nothing. You would not cry if you knew that by looking deeply into the rain you would still see the cloud.
– From No Death, No Fear: Comforting Wisdom for Life

This relates entirely to the death of our current form: we’re not ending, merely shifting into a new state of being. The water may change into many different forms, but it never ceases to Be.

7. Fear About What Happens To The Body After Death

If you’ve watched a lot of CSI episodes and horror movie marathons, it’s possible that you’re freaking out about what might happen to your body after you die. (Hello zombie apocalypse! Just kidding. No, really.)

Even though your body is just a temporary vehicle you’re riding around in, you’re attached to it and have been caring for it for years, so fretting about its inevitable decay is absolutely normal.

It’s a good idea to do your research about different options available for sorting out your body once you no longer inhabit it. Making an appointment to speak with a mortician is a good idea, but there are also many books to delve into.

Cremation and natural burial are just a couple of options – you can even have your ashes compressed into a little diamond for a loved one to wear, or your body buried wrapped around a sapling that will grow into a huge, beautiful tree, fed by your earthly remains.

Look into it, and once you’ve decided which option is most appealing to you, put it in writing to ensure it’ll happen.

One thing that unnerves a lot of people is the idea that death can happen at literally any given moment. We like things to be scheduled, dependable: we tend to balk at surprises, and well… the end of life can certainly be surprising.

Instead of picturing death as a malevolent force that’s hovering around, ready to strike at any second, it’s better to consider it a gentle companion that encourages us to fully enjoy the present moment.

Ultimately, this is all we ever have.

When and if you catch yourself freaking out about your eventual end, bring your attention back to the present moment.

Gently, without berating yourself: just take a couple of deep breaths and focus on what’s happening right this second.

This breath, this heartbeat, this sensation.

I know I’ve touched upon this many times in the articles I’ve written on here, but being mindful and staying in the present moment really is one of the best ways to combat anxiety and quell the constant “what ifs” that arise, especially when it comes to death.

It also allows us to fully enjoy and appreciate every experience that we have, and find immense peace in this extraordinary journey we call life.

Originally published on A Conscience Rethink. To see the article, click here.