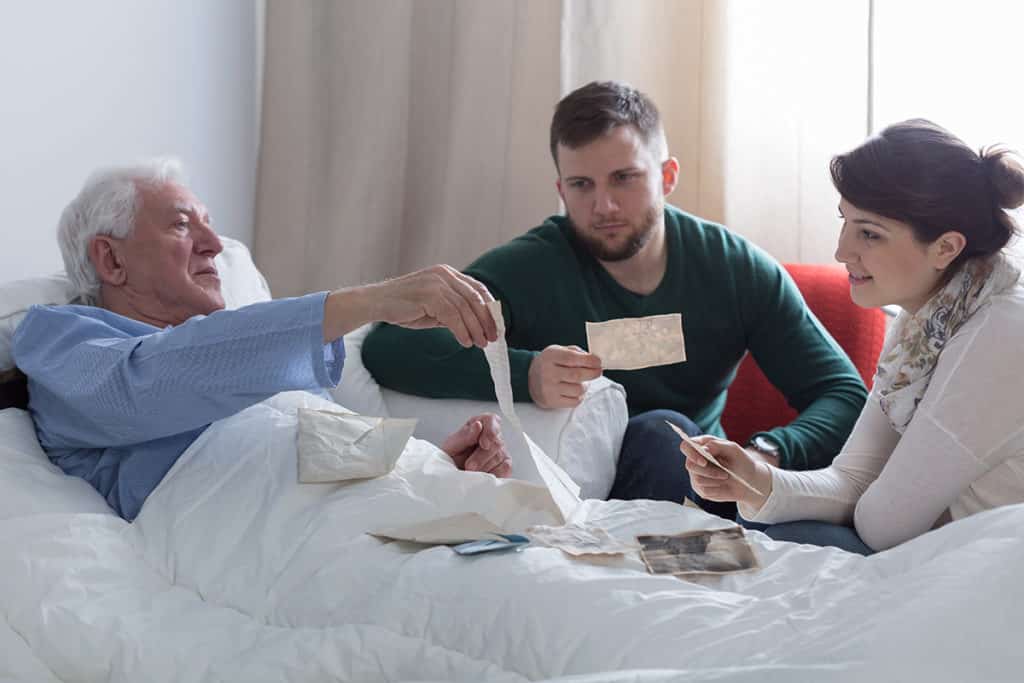 Margaret was an 82 year-old-woman suffering from cancer and dementia, who was admitted to hospice while staying in her daughter’s home.  After several months of steady decline from the diseases, Margaret did not speak anymore and in her bed-ridden state was in and out of consciousness, not even able to form full words anymore. Her dementia had prevented a lucid conversation, even gibberish, for the last several weeks.

Even though her mother stopped all verbal and non-verbal communication, everyone around still spoke to her about the goings-on. One day, when her daughter came into the room to check on her mother, Margaret opened her eyes, looked at her daughter and said, “Hello.”

Completely taken off-guard and shocked, Margaret’s daughter stood rooted to where she stood as her mother said she was hungry and asked for some lox and cream cheese, which used to be her favorite food. Her daughter got her it for her and after a couple of bites, said, “thank you,” and closed her eyes and went back to sleep.

Later that day, Margaret woke up periodically and though only in single complete sentences, spoke to her daughter the most comprehensively than she had in months. She was like this for the next day as well but on the third day, Margaret slipped back into unconsciousness and died 2 days later.

What just happened? Palliative and hospice experts refer to this as “rallying” or terminal lucidity and say it is a common occurrence but no one is sure why it happens. These bounce-backs generally last only a couple hours, but some go on for so long that the patients can take a break from a hospice for a few months. There are several reports of patients becoming suddenly conscious and aware and asking for particular favorite foods, typically associated with childhood or comfort. This is where it can be deceiving and leaving the family to think that the patient is getting better.

“There’s a great mystery around this,” said John Mastrojohn, the executive vice president of the National Hospice and Palliative Care Organization. “But everyone who works in the sector has a story.”

Rallies can also frequently involve a relationship, especially if the patient is waiting for someone to come to pay their respects or has something the patient wants to say they feel is important. Spiritually, some suggest that in getting ready for their transition, the patients wish to complete “unfinished business” with people they know—asking or giving forgiveness, final messages, saying a final goodbye, etc. Some speculate that patients simply want to make sure certain concerns will be attended to after they’re gone.

In a New York Times article on death rallying, Dr. Craig Blinderman, the director of adult palliative medicine at the Columbia University Medical Center stated that he has theories about physical causes behind the rallies. He suggests that as organs shut down, they can release a steroid-like compound that briefly rouses the body. In the specific case of brain tumors, swelling occurs in the confined space of the skull. The edema shrinks as hospice patients are weaned off food and drink, waking up the brain a bit.

The article went on to state that physiologically, experts believe that the mind becomes more responsive when a hospice patient is taken off the extensive fluids and medications such as chemotherapy that have toxic effects. Stopping the overload restores the body to more of its natural balance, and the dying briefly become more like their old selves.

Whatever the request is, palliative care experts suggest accommodating a loved one’s appeal, no matter how odd it may appear.

Seeing a loved one rally can be confusing and heartrending, especially those with dementia—to be able to communicate again. Whatever the reason behind these lucid periods whether physical or spiritual, it is really an opportunity—a window and second chance to have that two-way communication, an opportunity to engage with your loved one for a final time.

Click here to learn more about how you know when it’s the right time to call hospice.

The Mystery of End-of-Life Rallies

Rallying at the End-of-Life