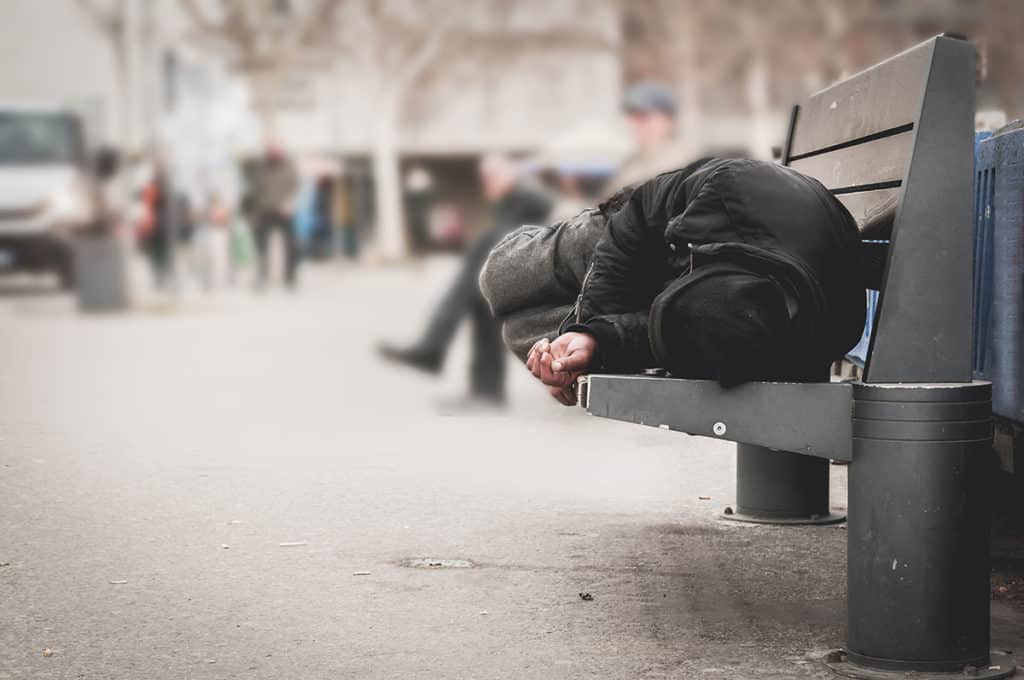 Many of the illnesses and conditions that people face are many times worse for the homeless, who often lack access to medical care and whose conditions are typically worsened by their lack of permanent housing. In Washington state, hospice programs for the homeless were created to ensure that their last days are more comfortable and are filled with dignity and compassion, and they don’t die alone.

Radio personality, Tom Tangney of radio station KIRO Radio, in Tacoma, Washington says, “There is a minor irony here. When you’re given a six month or less, in effect, death sentence, we as a society are much more compassionate because of our hospice care. The homeless in their last six months of life are getting treatment that they could never afford, or we as a society could never afford to give to them when they weren’t dying.”

Emergency rooms are typically the first stop in the health care system for the homeless. The EDs will often make the necessary hospice referrals, but where do they send someone who doesn’t have housing? Though there aren’t state laws ensuring that a homeless person in hospice care gets housing, various organizations work to provide care for them. According to the Web site Crosscut, an independent, nonprofit news site for the Pacific Northwest, as homeless Washingtonians near the end of life, hospice workers offer comfort wherever needed. Social workers, doctors, and nurses meet patients in untraditional settings, including tents, vans and shelters.

In 2018, Joshua’s House opened in Sacramento, California, breaking ground as the first hospice care facility for the homeless on the West Coast and one of only a handful across the country. Washington has no such dedicated inpatient facility, but some organizations across the state are doing work to make the last months of the state’s homeless residents lives more comfortable and less lonely.

Homeless populations have diverse and complex end-of-life needs. Chronic diseases and mortality rates are high in the United States, especially in homeless and underserved populations. According to the Department of Housing and Urban Development’s (HUD) Annual Point-in-Time Count, the only survey of its kind of homeless people, a total of 552,830 people in the United States were experiencing homelessness on a single night in 2018. This number represents 17 out of every 10,000 people in the U.S.

Some people living in homelessness experience sudden deaths on the streets from exposure or violence, but most deaths are the result of illness or chronic health conditions. Washington’s homeless population is the fifth highest in the country, and more than one-third of the deaths (73 of 194) of homeless people related to natural causes, reports Crosscut.

High mortality rates among people experiencing homelessness are often due to dying of conditions that are more easily treated in people with stable housing, such as pneumonia, influenza, HIV/AIDS, liver disease, renal disease, cold-related injuries, and cardiac arrhythmias. Because they lack access to health care for chronic health conditions, many people living in homelessness also die as a result of heart disease, cancer, lung disease, and other chronic illnesses.

“Maybe we should consider having a hospice-dedicated hospital kind of place for the homeless,” Tangney said. “After all, the homeless die a good 10 to 20 years earlier than most of us do, because it’s such a hard life and they don’t have access to medical care. With most of them, their only doctors are ER physicians and the problem with that is that it’s often too late to help them with major things.”

Standard clinical guidelines often fail to take into consideration the unique challenges presented by homelessness that may limit access to needed services or the ability to adhere to a plan of care. To address this, the Health Care for the Homeless (HCH) Clinicians’ Network has made the development of recommended clinical practice adaptations for the care of impoverished people experiencing homelessness one of its top priorities. Since 2002, the Network has developed and revised recommendations for the management of health problems that are common among homeless people and are particularly challenging for their caregivers.

In October 2016, the Clinicians’ Network Steering Committee met with leaders of the Respite Care Providers’ Network (RCPN) and the National Consumer Advisory Board (NCAB) to define the guidelines’ major content areas. In January 2017, an advisory committee comprising health and social service providers experienced in end-of-life care for underserved populations was convened to develop recommendations for end-of-life care for people experiencing homelessness.

These recommended practice adaptations reflect their collective judgment about end-of-life care for this population and resulted in a 40-page document, Adapting Your Practice—Recommendations for End-of-Life Care for People Experiencing Homelessness, that outlines procedures and recommendations for health care professionals who work with individuals who are homeless or at risk of homelessness.

Homeless people often suffer from complex and chronic comorbidities, have high rates of morbidity and die at much younger ages than the general population. Due to a complex combination of physical, psychosocial, and addiction problems at the end of life, they often have limited access to palliative care. Both the homeless and healthcare providers experience a lot of barriers. Therefore, providing quality end of life care that fits the needs and concerns of the homeless is a challenge to healthcare providers but is something that needs to continue to be addressed.