After watching her son, David, known as DD, die from cancer, Sacha Langton-Gilks thought about the lessons she had learned from the experience and was inspired to write a book called Follow the Child. She wanted to help other grieving parents in their struggle of coming to terms with the death of their child.

When asked what the title meant, she said that it was  “because that was what a bereaved mother, whose child had died before DD, told me to do. I realized if she could do it, I could do it, and if I could do it, other parents listening to me or reading my words could too.”

DD was initially diagnosed in 2007, at age 11, with Medulloblastomas, a group of cancerous brain tumors, most common in children. Over the next five years, he endured 20 months of chemotherapy, six weeks of radiotherapy and 11 brain operations – an experience his mother says was a “living hell” for her son.

In May 2012 when his cancer returned for the third and final time, making DD terminal, they decided to forego any treatment that would keep him alive and instead, focus on enjoying the time he had left. “Rather than trying to prolong his life with all that entailed, we chose maximum quality of life in a shorter time because that was right for our child,” she said. 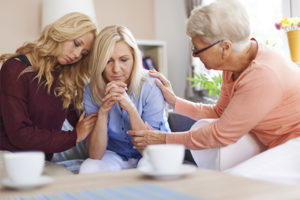 Her biggest consolation and what she feels is her biggest achievement in life was being able to fulfill the emotional, physical, and spiritual wishes of her son during the last three months of his life, which included the care he received from the palliative team. When he was initially given his diagnosis, she still thought that the cancer would be cured because she was told there was a high percentage chance so she didn’t think that there was a need to look into palliative or end-of-life care. To do so implied to her that she was giving up on him and his treatments. But that soon changed.

“It was all about fighting,” she said. He had multiple treatments at home (that weren’t curative) during his last three months and she believes that not giving up and having the hope of life every day, which she credits right down to the palliative care he received, had given him the quality of life that enabled him to live “as long as he possibly could because his life was so good.”

She said that his “major symptoms of seizures, sickness, dementia and pain from the satellite tumors that had spread from his brain all down his spine were all under control with a barrage of medication and equipment.” Up until those last four days in bed, a good day for him involved cooking, studying and flying birds of prey, partying with friends, following environmental issues, watching movies and playing and arguing with his brother and sister.

Nothing was done to him medically during that time that would interfere with his loves. She described him as calm and comfortable in his bed and looking out the bedroom window when he uttered his last lucid words, “I love it here.”

Langton-Gilks believes that the death of her son doesn’t mean she failed. Just the opposite. It was from working with his medical team to what she calls a “battalion of experts” available 24/7 from a local hospital, and being able to provide care at home in an environment surrounded by the people and things he loved, that she was able to provide the exact quality of life that was completely opposite of what was available when he was initially diagnosed.

It was finding and providing this type of care that was also the partial inspiration for her book. During the writing, she consulted four other sets of parents who were passionate about improving end-of-life care and they consulted experienced social workers, palliative nurses, and pediatric palliative consultants.

Langton-Gilks who lives in Shaftesbury, Dorset with her husband and two surviving children is part of a growing movement of professionals, patients, and caregivers who are working toward positive action and thinking about end-of-life preparation and fighting for the UK government to “commit to developing a national children’s palliative care strategy for England.”

She believes that “the key is to plan well in advance, when you’re not crisis-stressed, as you do with a birth plan, planning for life up to an inevitable death.” She added that they had many honest conversations about what was happening during his treatments and he knew and accepted that he was going to die.

Click here to learn more about whether children with terminal illnesses should be on hospice care.