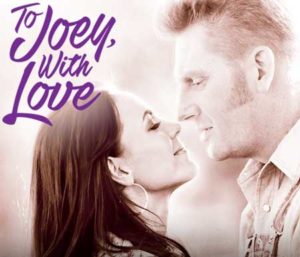 An inspirational love story their fans know well, Rory Feek and Joey Martin were married only weeks after meeting each other. Both from country music backgrounds, Rory performed and wrote lyrics for country music greats like Blake Shelton, Easton Corbin, and Collin Raye, while Joey Feek, a musician and singer in her own right, signed with Sony around 2001 for her own recording contract.

At the suggestion of a friend, they auditioned together for Country Music Television’s (CMT) “Can You Duet” competition show. After winning third place and recording an album together in 2008, they exploded onto the national country music scene and their fan base increased not only from their music but the inspirational love they shared that was obvious to anyone who saw them together.

After winning 2010 Academy of Country Music’s Top New Vocal Duo, Joey + Rory, as they were now known, were on top of the world recording several albums together. A song Joey sang on their third album, “When I’m Gone” about a wife telling her husband he’ll be alright after she’s gone was almost a foretelling of what was to come. The song struck a chord with Rory, affecting him deeply because it was a devastating concept to him and it just wasn’t something he thought about.

That song would almost portend what their lives would become when in 2014, Joey was treated for cervical cancer. The cancer came back in 2015, but now it was terminal. On March 4, 2016 the 51-year-old country singer lost his 40-year old wife to cervical cancer.

As deeply in love as they’ve ever been, Rory is giving his wife the ultimate tribute by sharing her story—their story—in To Joey, With Love, a documentary that opened in select cities earlier this Fall. Rory worked on the project at the couple’s farm in Pottsville, Tennessee, where he is surrounded by reminders of their 14-year marriage and the career they shared. He is also now working on a book based on his blog “This Life I Live,” which documented the couple’s journey since Joey’s cancer diagnosis. The book is scheduled to arrive in stores on February 14, 2017.

“When I came home and started going through the footage that I had filmed for the last two and a half years, I was mostly elated because it had been such a powerful time over the last four or five months of seeing Joey become less and less and finally pass away,” he explained in an interview with the Today Show.
“Those images really were all I could remember and all I could see in my mind. I couldn’t really remember Joey healthy and strong. I couldn’t remember her working in the garden. When I started looking at the footage, she came back to life.”

When asked why he thinks people are responding so much to their story, he answered, “I don’t really know. I think maybe like me, they rarely get to see a beautiful love story even in a tragedy.” He thought for a moment and continued, “Even if it is tragic, sometimes the most beautiful things happen in the midst of tragedy. You get to see it because we shared it. I’m in awe of it. So I can see why it matters to them. We always had a childlike faith in God even when things were not okay ”

There is a cemetery about 100 yards behind the farmhouse where people who built the farm are buried, and it’s also “where we laid my wife to rest,” Rory shared. “We can sit out on the back porch and we can still feel her there and she’s not that far away. So it’s pretty special to be there.”

Rory is now retired from music and spends his time parenting the couple’s daughter, Indiana, who was born with Down Syndrome just 3 months before Joey was diagnosed with cancer in 2014. He lives there with two daughter’s from his first marriage and is surrounded by the life he and Joey built together. Joey’s cowboy boots are still lined up against the wall.

In his blog, “This Life I Live,” Rory thought he was going to write about their life in the country or raising their daughter, but it was about cancer. The two-year span covered in the blog is about their life, love, and hope. Before she died, Rory revealed that he and Joey repeated the words “I love you” to each other three times. The power of their love is evident in each piece of writing and every scene in the documentary. It’s a beautiful way to honor the passing of a woman whose love and faith in her husband and God are unmistakable. Rory knows that Joey was at peace with where she was going, and so was he.

It is in that peace that Rory has been able to celebrate their love and life together and leave a legacy to not only his family, but to others as a testament to unshakable faith and love.